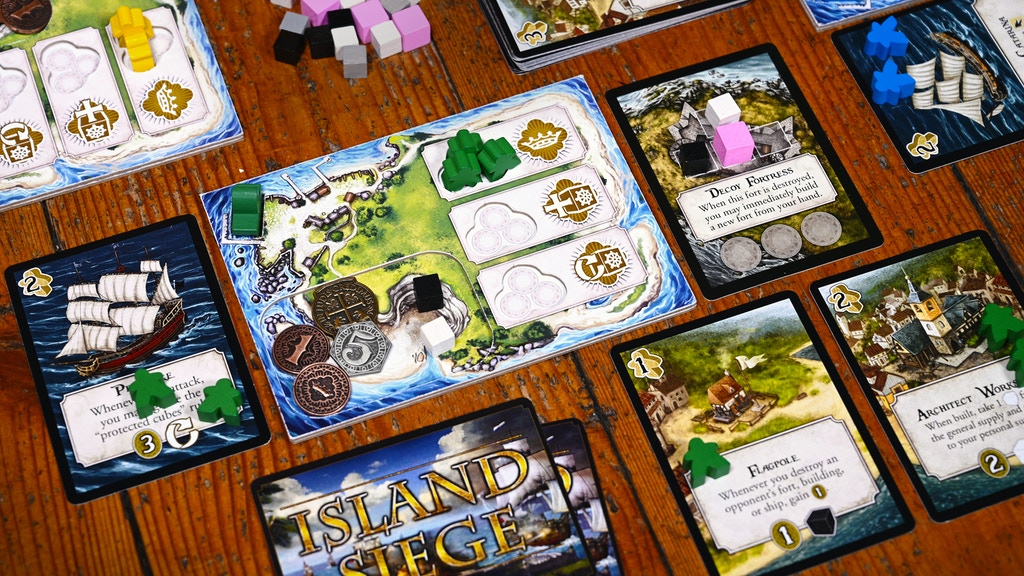 A card game of colonization in the West Indies. Build forts and buildings, and send your ships to lay siege to the enemy!

Latest Updates from Our Project:

I just got more news from my freight forwarder:


So more bad news out of China.  I swear for the past two months, all we have seen is delay after delay with ocean cargo leaving there and Asia in general.  It’s been nuts.  And adding insult to injury I would be willing to bet we see delays from here.  US and EU ports and railways are jammed up as well with congestion.  Apologies for the delays.  It’s just the nature of the market right now.

We know the ship to the US. It's the Nagoya Express 062E. Unfortunately, it's also delayed and won't leave until 11/26.

Sorry for the delays but at this point it's just a waiting game. You are invited to sit at your browser hitting F5 all day to get real-time updates, but I'll post updates when the shipments hit their destination.

Asia and AU/NZ have received the shipments and will begin shipping to customers right away.

The ship to Europe is in China, aboard the Cosco Shipping Sagittarius 011W.

Finally, I have yet to receive word about the ship to the US, (which will service Canada and the rest of the world), but will update you when I learn something. The last I saw, the ETD was today (11/21).

I'm getting several requests for shipping updates. I don't have much yet, but here's what I do know:

I will, of course, update you when I have more information.

It's time for another update!

Production is complete, and they're working on final assembly. They made this video to get packing approval. I've asked them to put the three coin packs into another plastic bag to avoid jostling and to give you a place to keep the coins after you remove them from their original packaging.

The K sticker will be added to the outside of the shrink wrap.

The games should be ready to ship to fulfillment centers shortly The next update I post will include freight tracking info so you can follow the ships across the seven seas!

I teased you in with an update earlier this week that showed the production proof package which arrived via DHL. I'm happy to be able to show you more pictures of what's inside!

The box has some black ink spilled on it. I need to ensure that's not a problem with all games. Also, the Island Siege logo on the top of the box creates a box that's lighter than the rest of the background. It's hard to see, but it needs to be fixed.

The Components list is missing the two Monuments boards. I also don't like the heavy shadow on the logo here. Since we need to update the box top we will also fix these issues on the box bottom. Note that your game won't come with punchboard coins, but rather metal coins. The punchboard coins are for the retail version of the game.

The fourth die looks easily differentiated here, but under bright light conditions it can be a little harder to tell the difference. This is a minor problem since all the dice are the same, and it doesn't matter which ones you roll. But if it is an easy fix, we'll make the fourth die a little darker.

The stones are good. I'm being super-picky, but under bright light it can be a little hard to differentiate gray and white. I am talking about this with the factory but will probably not change it.

No problems here - they look great!

Note that the ship fits nicely into the dock on the two-layer board and three meeples fit easily into each of the sections on the right. The 'quarry' on the lower left holds the stones. Overall it looks fantastic. The only possible change here might be to make the quarry slightly smaller so that there's more room for glue between the layers on the left and bottom.

The monument boards are two-sided. The reverse side of the boards can be used to hold the general supply stones when not playing Monuments.

The coins are still being produced. The Campaign Coins team wasn't 100% happy with the finish on the '10' coins, and so are creating replacements. These are scheduled to be complete on September 10th.

We were slated to ship in October. I think that's still possible for some parts of the world - Asia and Australia/New Zealand. But for the rest of us, it will probably be November.